No man is justified in doing evil on the ground of expedience.

Nowadays the rage for possession has got to such a pitch that there is nothing in the realm of nature, whether sacred or profane, out of which profit cannot be squeezed.

I was lucky enough to see with my own eyes the recent stock-market crash, where they lost several million dollars, a rabble of dead money that went sliding off into the sea. Never as then, amid suicides, hysteria, and groups of fainting people, have I felt the sensation of real death, death without hope, death that is nothing but rottenness, for the spectacle was terrifying but devoid of greatness.

Wars are poor chisels for carving out peaceful tomorrows.

A desk is a dangerous place from which to view the world.

On Meet the Press this morning (video in link).

The discipline of writing something down is the first step toward making it happen.

7-Eleven is doing their own presidential poll

When you buy coffee, you pick an Obama or McCain cup. So far, Obama is slaughtering McCain among 7-eleven customers. 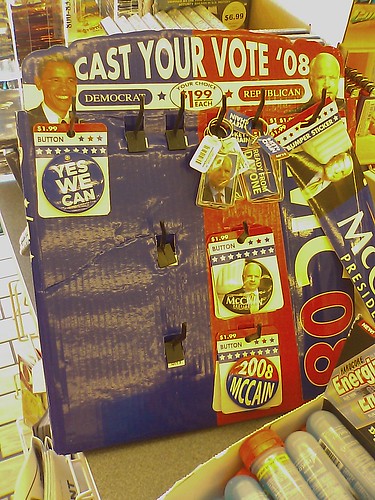