I am not bothered by the fact that I am unknown. I am bothered when I do not know others. A few years ago, colleagues from Duke University compared the antidepressant effects of aerobic exercise training to the popular antidepressant medicine sertraline, as well as a placebo sugar pill. They randomized depressed patients to one of the interventions and found that after four months about 40 percent of the subjects were no longer depressed. Those who exercised or received the medicine had higher and comparable response rates, but they were only slightly better than the placebo group. Those who exercised at a moderate level – about 40 minutes three to five days each week – experienced the greatest antidepressant effect. So they interpreted that to mean that exercise was just as good as medicine. And in that particular study, the high placebo response meant that nonspecific influences like patient expectations and the attention from the study personnel during monitoring visits may have caused the therapeutic response.

Exercise not only increases blood flow to the brain, it releases endorphins, the body’s very own natural antidepressant. It also releases other neurotransmitters, like serotonin, which lift mood. In fact, the antidepressant in the study, sertraline, is an SSRI or a selective serotinon reuptake inhibitor – it is thought to exert its effects on body chemistry by increasing the amount of brain serotonin, a chemical that is lowered during depressed mental states. Brain-derived neurotrophic factor, a chemical that promotes brain health and memory, is also reduced in depression, and exercise has been found to elevate levels of this neurotransmitter. Maybe a fitness program could boost my friend’s levels in all these areas, and help his forgetfulness, too. He could only laugh at the idea of having 40 extra minutes three times a week to exercise. His wife was mad enough that he worked 14 hour days as it was.

move a muscle = change a thought

If you wanna get on your feet, you’ve gotta get off your ass!

In politics, strangely enough, the best way to play your cards is to lay them face upwards on the table.

What exactly is “viewer discretion”? If viewers had discretion, most television shows would not be on the air.

Asking is the beginning of receiving. Make sure you don’t go to the ocean with a teaspoon. At least take a bucket so the kids won’t laugh at you.

Dringle: The watermark left on wood caused by a glass of liquid.

Dunandunate: The overuse of a word or phrase that has recently been added to your own vocabulary

Earworm: A catchy tune that frequently gets stuck in your head

Furgle: To feel in a pocket or bag for a small object such as a coin or key

Griefer: Someone who spends their online time harassing others

Locavor: A person who tries to eat only locally grown or produced food

Nonversation: A worthless conversation, wherein nothing is explained or otherwise elaborated upon

Polkadodge: The dance that occurs when two people attempt to pass each other but move in the same direction

Pregreening: To creep forward while waiting for a red traffic light to change

Spatulate: Removing cake mixture from the side of a bowl with a spatula

Stealth-geek: Someone who hides their nerdy interests while maintaining a normal outward appearance

Wibble: The trembling of the lower lip just shy of actually crying

Wurfing: The act of surfing the Internet while at work

In summary, Ping is not very social and it is not really about music. It is about music purchases and celebrities.

Yeah, right now I am not impressed at all. They could do so much with this service, but they’ve chosen to make it useless. There is a horse in the Apple Store and no one sees it but me.

I think, “Why?” What is the villain here that blinds all of these people to this situation? Am I nuts for thinking this is exceptional? Does anyone else see this? Did I accidentally drop acid and not realize? I must take a photo…. 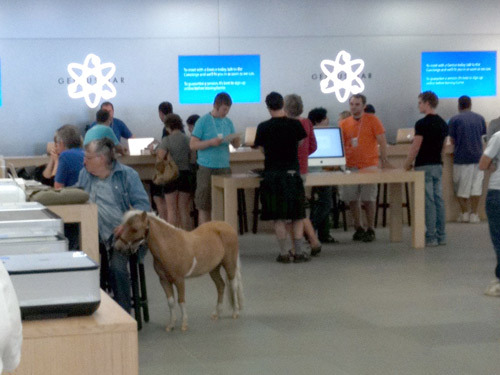 There is a horse in the Apple Store and no one sees it but me.

I think, “Why?” What is the villain here that blinds all of these people to this situation? Am I nuts for thinking this is exceptional? Does anyone else see this? Did I accidentally drop acid and not realize? I must take a photo….

Yet another reason why retail sucks.