Customer: “Is this the real life?”

Customer: “Is this just fantasy?”

[clerk]: *catching on* “Caught in a landslide, no escape from reality.”

News: Research firm Instat tells the Orange County Register that the cable industry is losing about a million customers per year. That’s not to

I once worked for a web startup where this was atop the trash can beside the CEO’s desk. 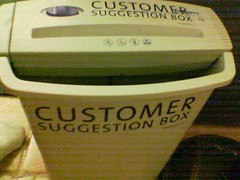 It was meant to be a joke, but it was much closer to truth than any of us were able to admit. Needless to say, the company is no more. 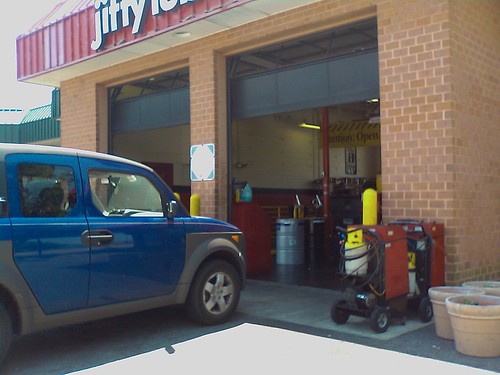 I’ve heard horror stories about Jiffy Lube, but never had a bad experience with them myself until today. I think (really hope) the oil change was OK, but the usual “jiffy” customer service just wasn’t happening at this location (Ocean City, MD). I’ve been to this one and others on Maryland’s Eastern Shore in the past and always been very impressed with the professionalism and courtesy of the folks working inside.

This one was out of my oil weight and tried (successfully) to sell me on using a different weight and, as you can see in the picture, this all happened after considerable wait time. The convenience factor of Jiffy Lube is the only thing that makes me risk going there. One friend of mine had to get a new engine thanks to a Jiffy Lube mistake!

There’s another place I prefer near home that is:

Oh, if I only had time for another blog!

I’ve been meaning to blog at this inspired (by poor customer service) name for a while http://www.bankdecay.com/

And the perfect header image…

Now I just need an extra hour every hour! 🙂

sarahchristine had a great experience with Wachovia:

Last week when I had $5 and some cents in my bank account, a $6 charge for new checks came out of my account (2 weeks after I got the checks I might add) and made my balance -.46! But thank goodness I have overdraft protection and did not incur a fee. I put in my money for May and all was right with the world. I’m not money-savvy or anything, but I must say: I love my bank and have had nothing but good experiences there. Much better than my former bank: Bank of America (grody).

As far as I can tell (without doing any actual research), “overdraft protection” means that they’ll let checks clear even if they’ll give you a negative balance. They protect you from issuing bounced checks, not from bank fees.

When I accidentally double-executed a huge transfer a few months ago, throwing my balance to $-950, Bank of America was happy to let the second transfer clear… and then didn’t tell me. Why not? Because they started charging me $30/day. I only noticed because I was refused an ATM withdrawal a few days later, and fortunately I was able to fix the negative balance within hours of discovering it.

(Even though I track my finances down to the penny with the also-impressively-mediocre Moneydance, Bank of America doesn’t offer an OFX “Quicken” interface unless you pay $10/month, so I manually synchronize my real account with its balanced Moneydance replica every few weeks to make sure I didn’t miss anything.)

Fortunately, I went into the bank when I knew the young new guy from the Bronx would be there (because he’s the nicest and most lenient), and convinced him to remove the charges. That was also interesting:

Last time I had to ask for bank-charge forgiveness, about 5 years ago, I went in, asked politely, and they said “Of course, no problem, sorry about those charges.” This time, going to the nice Bronx guy was completely unnecessary: the process has been boiled down to a sterile algorithm. He submitted the request into an administrative web interface, and Bank of America’s servers calculated that since I’m a good customer and this was my first offense with them, the charges could be dropped. I was algorithmically forgiven.

My personal connection with the nice Bronx guy was useless in both directions: he didn’t need to like me, but more importantly for customer retention, I didn’t need to know him and think of him personally when thinking of my bank. He’s no more of a banker than a McDonald’s burger-flipper is a chef.

When I moved to New York and left PNC Bank in Pittsburgh, I felt guilty. These were nice people who helped me as humans numerous times. (I never paid for checks once.) In return, I was a great customer for as long as I lived there, I referred many new people to them, and I’m talking about them here now.

But Bank of America? I have absolutely no affinity to them whatsoever. I’ll switch whenever any opportunity comes around that makes the transition worthwhile. (Like free OFX.) And it’s mostly because they haven’t connected to me as humans.

(get a real person on the phone)