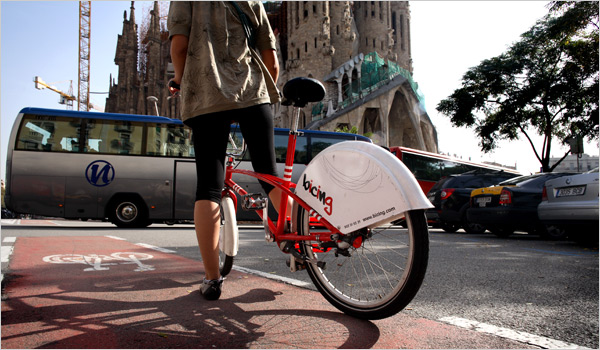 European Support for Bicycles Promotes Sharing of the Wheels

Bicycle-sharing programs have sprung up and taken off across Europe, on a scale no one had thought possible and in places where bicycling had never been popular.

A nation held hostage by a “gut feeling”

I heard this on the news this morning also. How utterly insulting and ridiculous to every single person in this country.

Hey, how about a resignation Chertoff? Idiot! Obviously, there is an agenda being served here, so maybe it’s ultimately good… but who believes that’s even remotely possible—or even plausible?

On Tuesday, Homeland Security Secretary Michael Chertoff told the editorial board of The Chicago Tribune that he had a “gut feeling” about a new period of increased risk.

He based his assessment on earlier patterns of terrorists in Europe and intelligence he would not disclose.

“Summertime seems to be appealing to them,” Chertoff said in his discussion with the newspaper about terrorists. “We worry that they are rebuilding their activities.”

Other U.S. counterterrorism officials, who spoke on condition of anonymity, shared Chertoff’s concern and said that al-Qaida and like-minded groups have been able to plot and train more freely in the tribal areas along the Afghan-Pakistani border in recent months. Osama bin Laden and his top deputy, Ayman al-Zawahri, are believed to be hiding in the rugged region.