Well, according to Urban Dictionary, a “Poke Off” is:

When two people (usually elderly) take up both lanes of a highway and drive a the speed limit or sometimes slower, causing everyone else to be pissed off.

I don’t buy it though. There were only three votes, all positive. I voted it down and suggest you do the same!

On a 500+ member strong Facebook page titled The Official Facebook Poke Rules, “Poke Off” is defined as:

1/. A poke off does not need to be declared between interested parties . The initial poke is sufficient to instigate the poke off.
2/. Once a poke off has started the pokee must poke the poker within four days of logging on to Facebook.
3/. The winner is the poker who pokes last, as long as the previous rules have been stuck to, and the pokee fails to poke the poker back according to rule 2/.
4/. The poke off winner should humiliate the loser in an appropiate manner. “LOSER” in a wall post will suffice as a bare minimum.
5/. Physical poking, in all of its forms, counts.

Most people in the United States call this activity a Poke War (probably because war is sort of chic here). It’s the same thing. People just poke back and forth, either rapidly or sporadically, over a short or extended time period.

The sad fact is that these applications are susceptible to malware pushers and those looking to steal your personal information. It’s not much of a stretch for hackers to impersonate people you think are trusted, fellow players, as is the case with a lot of online gaming. And the more you expose yourself, the bigger the target you become.

Are you on Facebook? Can you write a quick review of Shawn Blog?

Just under the “fans” (which you most certainly should become if you are not already), there’s a new Reviews section. If you have a minute, please write one. It doesn’t even have to be nice! 😉

The years really do fly by. Don’t miss a minute.

Natalie: get back to poking
me: you are insatiable
Natalie: it gets worse as the days go on
me: you need me and it shows
Natalie: i do… i would be lost without you
me: that explains the stalking
Natalie: yes… it might

Facebook is buggy. “Secret” event wall posts are shown to all. In my case, it was a password protected map link to my home address. I posted the password to the “secret” event’s wall. Of course, I didn’t know that wall post would be shown to everyone. 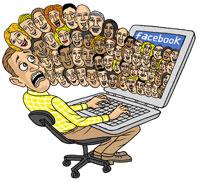 “Commandments” may be a little strong, since one user might use FB for different reasons than you or me but there is some great advice here.

There are two ways application developers are breaking the rules to get new users. The first: When a user looks at an application on his/her profile the application can show something different than when other users view the profile. So a user adds an application that looks nice to them. But everyone else sees, say, a big yellow box with an advertisement that says the user wants you to add this application, too.

The second and more devious scheme is being used by many of the largest application developers. They all involve some sort of notification fraud. Generally, you add an application. Then, every one of your contacts is notified that you’ve “written on their wall” or “have asked them a question,” even though you never did. To view the content the contact must add the application. They then find out there is no wall comment, or its a canned question like “is it ok to kiss on the first date?”