Right-wing media evolved into a hall of mirrors in 2016, when Breitbart displaced Fox News as the key agenda-setting and attack-leading epicenter of a disinformation-filled, paranoid ecosystem promoting Donald Trump and his pro-white America agenda.

Breitbart not only led the right’s obsessive, hostile focus on immigrants, it was also the first to attack professional reporting such as the New York Times and Washington Post. Breitbart’s disruptive template fueled the political and information universe we now inhabit, where the right dismisses facts and embraces fantasies.

There is no corollary dynamic on the left or among pro-Clinton audiences in 2016. The left’s news sources, media consumption and patterns of social media-sharing are more open-minded and fact-based and less insular and aggressive. Still, Breitbart’s obsessive focus on fabricating and hyping scandals involving Hillary Clinton (and Jeb Bush early in the primary season) pushed mainstream media to disproportionately cover its agenda.

These observations are among the takeaways of a major study from Columbia Journalism Review that analyzed 1.25 million stories published online between April 2015 and Election Day 2016. While the study affirmed what many analysts have long perceived—that right-wing media and those who consume it inhabit a paranoid and dark parallel universe—it also documented shifts in the right’s media ecosystem; namely, Breitbart supplanting Fox News as the leading purveyor of extreme disinformation.

For years, and almost always mainly just for fun, I’ve listened to conservative talk radio hosts. I’ve also always wanted to understand how others see things. Seeing both sides is, of course, necessary for critical thought

Today, I watched a few Breitbart video clips (stolen content with their branding in a frame, btw) in an attempt to grok the perspective of other folks I know who still insist on towing that line. Right after seeing that video, I saw this as it was freshly posted. Here I am reading it again late night and just befuddled at how things have changed.

I used to see these “wingnuts” (right wingers) as something remote and distant. Now it seems as though they’re fully entrenched. It’s sick and sad.

<p>John Hudson, a staff writer at The Atlantic Wire, has sent over a Fox News article about Navy-trained dolphins that looks remarkably similar to his own article from two days earlier.</p> 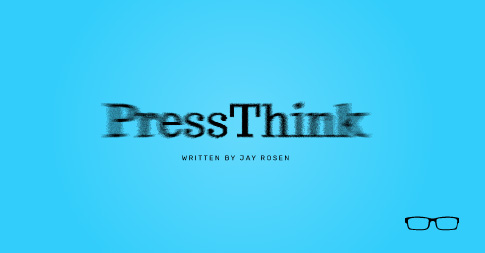 Not sure whether I will continue to do these things, but I recorded my second Late Night with PressThink video. It tries to explain “what Fox News actually is, which really means explaining it to myself…”