and even though Tumblr wasn’t mentioned in the video, certainly it would be one of the websites to be taken down – just think of how much of your dashboard content is copyrighted. a lot, right? 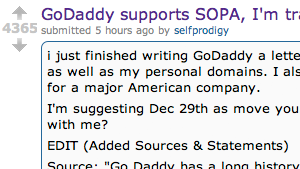 Most Internet companies oppose the Stop Online Piracy Act, but the domain …

Major Internet companies have formed a united front in their opposition to the Protect IP Act and the Stop Online Piracy Act. Well, almost. One exception has been the domain registrar GoDaddy. In a op-ed published in Politico shortly after SOPA was introduced in the House, GoDaddy applauded the bill and called opponents “myopic.”

“I just finished writing GoDaddy a letter stating why I’m moving my small businesses 51 domains away from them, as well as my personal domains,” wrote redditor selfprodigy on Thursday morning. He proposed that December 29 be declared “move your domain day,” with GoDaddy customers switching to competing registrars. The post has accumulated more than 1,500 comments, most of them supporting the idea.

We contacted GoDaddy for comment. A spokesman declined to comment on the boycott specifically, but reiterated the firm’s support for the legislation. She sent us a link to the company’s written testimony to the House Judiciary Committee last month.

The company dismissed free speech concerns. “Not only is there no First Amendment concern, but the notion that we should turn a blind eye to criminal conduct because other countries may take oppressive steps in response is an affront to the very fabric of this nation.”

GoDaddy appears to be doubling down on this position. Today, it reposted its Politico op-ed to the GoDaddy support forums. Comments were disabled…

If there’s a really easy way to move my domains, I’ll move them in a minute. The only reason I’ve never done it yet is because I’m not really sure how to move a domain to another registrar.

I don’t think it’s as simple as registering a domain. Does it create downtime for sites hosted on domains that are moved?

Dear Congress, It’s No Longer OK To Not Know How The Internet Works

You think you can be cute and old-fashioned by openly admitting that you don’t know what a DNS server is. You relish the opportunity to put on a half-cocked smile and ask to skip over the techno-jargon, conveniently masking your ignorance by making…