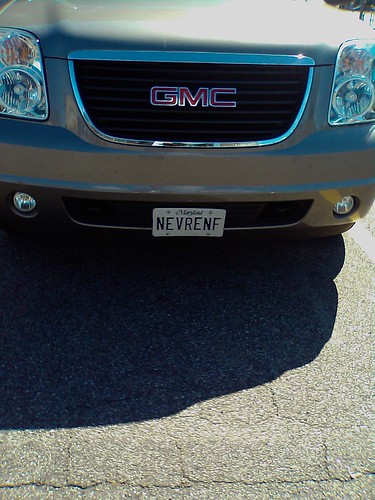 In the early 90’s, I was working for Daymon Associates doing market research. I had been keenly observant of vanity plates for most of my life already, since my Dad used to figure them out on our drives back and forth from New York when I was a young kid. It was in this travel heavy job, that my constant vanity plate observations probably became much more thoughtful because I was on my own for 10-12 hours at a time—and looking at plenty of cars!

One day, walking out of what was then named Price Club (now Costco) on West Ox Road in Fairfax, VA, I noticed a Chevy Suburban being loaded up with several flat carts of merchandise from what must have been a very expensive shopping trip. The truck adorned the Virginia vanity plate: NEVERENF

At that age, the ideas of love, peace and happiness in a “less is more” lifestyle had not yet crossed my mind. If someone had suggested the truth that the more things you own, the more things own you, I might have laughed before disregarding them as foolish. New stuff was the answer, right!? It had to be… I wanted it!

Lust for more, greedy thoughts and hording are, sadly, the common mode of operation for many in our world. I don’t know if the vanity plate “NEVERENF” was social commentary on this observation or simply acknowledgment of the owners condition, but over the weekend, this distant memory came back as though it had happened yesterday.

I was in New York, attending a memorial service with friends for a great man. After a 4am departure from MD, we were meeting with the family at Carle Place Diner. In the bright, morning sunshine, one step before walking in the door of the diner, I turned and notice the Maryland vanity plate NEVERENF on an SUV.

A rush of the memories I’ve briefly described above came over me. As I told my friends, I was informed that the owner was a cousin in the family we were there attending the service for and it was later confirmed that it had been a Virginia plate years earlier, belonging to her brother!

I suddenly felt I must have a cosmic connection with vanity plates. Who knows, maybe all of us do! 🙂

Sergei Morozov wants couples to take the day off work to have sex. If a baby is born on national day, they will receive cars, TVs or other prizes.

The population has sharply declined since the Soviet Union collapsed.

This is the third year that Ulyanovsk, in central Russia, is offering prizes for babies born on 12 June.

This year, a couple won the grand prize of a sports utility vehicle (SUV).

The initiative seems to be paying off, as the region’s birth rate has risen by 4.5% over the last year.